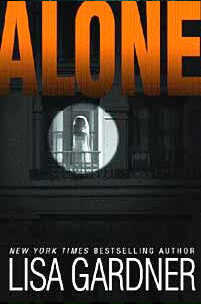 It’s where you’re most vulnerable. . . It’s where there’s no one to hear you cry for help. . . It’s the last place you want to be when this killer comes. . . ALONE

Alone. . .Massachusetts State Trooper Bobby Dodge watches a tense hostage standoff unfold through the scope of his sniper rifle. Just across the street, in wealthy Back Bay, Boston, an armed man has barricaded himself with his wife and child. The man’s finger tightens on the trigger and Dodge has only a split second to react. . .and forever pay the consequences. Alone. . .that’s where the nightmare began for cool, beautiful, and dangerously sexy Catherine Rose Gagnon. Twenty-five years ago, she was buried underground during a month-long nightmare of abduction and abuse. Now, her husband has just been killed. Her father-in-law, the powerful Judge Gagnon, blames Catherine for his death. . .and for the series of unexplained illnesses that have sent her own young son repeatedly to the hospital. Alone. . .he survived solitary confinement in a maximum security prison where he’d done hard time for the most sadistic of crimes. Now he walks the streets a free man, invisible, anonymous. . .and filled with an unquenchable thirst for vengeance. What brings Bobby and Catherine together is a moment of violence – but what connects them is a passion far deeper and much more dangerous. For a killer is loose who’s woven such an intricate web of evil no one is above suspicion, no one is beyond harm, and no one will see death coming until it has them cornered, helpless, and alone.

Wal-Mart picked ALONE to be the Read of the Month for January ’06.

"Readers will enjoy this novel’s thrill-packed, roller-coaster ride."
- Boston Globe
"Like all the best suspense novels, Alone will leave you shaken. . . you can’t wait to see what happens next."
- PEOPLE
"Intricate and suspenseful. . . "
- LA Times
"Keeps readers spellbound. . ."
- Publishers Weekly
"A twisted, effective, psychological thriller."
- Booklist
"Three-dimensional characters fill out a riveting story that is like a juicy steak, slow-broiled to perfection."
- Library Journal - Starred Review
"Gardner. . . keeps the pages turning."
- Kirkus
"A powerful psychological suspense police procedural."
- The Best Reviews - Harriet Klausner
"Lisa Gardner has crafted a masterpiece of suspense, the epitome of an all-nighter. [It's] chilling and hypnotic."
- Romance Reviews Today - Jane Bowers
"The ending (and even the middle) of Alone is impossible to predict. Gardner wrings every possible surprise out of the storyline, and continues to do so until practically the last page. Everyone in the book is suspect; no one is precisely who they seem to be. Impeccably plotted and superbly written, Alone is a novel that will leave you torn between racing to finish it and lingering over its characterizations. Highly recommended."
- Bookreporter.com - Joe Hartlaub