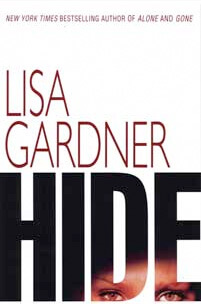 
Lisa Gardner, the New York Times bestselling author of GONE and ALONE, taps into our most intense fears in this terrifying new suspense thriller that pits two detectives against a killer who seems to have returned from the dead. No use locking the doors or turning on the lights, this time there’s no place to. . .hide.

You have good reason to be afraid. . .

It was a case that haunts Bobby Dodge to this day-the case that nearly killed him and changed his life forever. Now, in an underground chamber on the grounds of an abandoned Massachusetts mental hospital, the gruesome discovery of six mummified corpses resurrects his worst nightmare: the return of a killer he thought dead and buried.

Bobby’s only lead is wrapped around a dead woman’s neck. Annabelle Granger has been in hiding for as long as she can remember. Her childhood was a blur of new cities and assumed identities. But what-or who-her family was running from, she never knew. Now, a body is unearthed from a grave, wearing a necklace bearing Annabelle’s name, and the danger is too close to escape. This time, she’s not going to run.

The new threat could be the dead psychopath’s copycat, his protégé-or something far more terrifying. Dodge knows the only way to find him is to solve the mystery of Annabelle Granger, and to do that he must team up with his former lover, partner, and friend D. D. Warren from the Boston P.D. But the trail leads back to a woman from Bobby’s past who may be every bit as dangerous as the new killer – a beautiful survivor-turned-avenger with an eerie link to Annabelle.

"The tension here doesn’t stem just from the sicko responsible for setting every Boston parent on edge, but from Dodge and his witness, whose relationship sizzles as the case careens to its twisted climax."
- PEOPLE - 4 Stars
". . . gripping, the progatonists earn quick sympathy, and the pages turn with speed . . ."
- The Wall Street Journal
"An angsty, gripping psycho-killer saga. . ."
- Entertainment Weekly
"Through expert use of red herrings, Gardner takes the reader on a nail-biting ride to the thrilling climax."
- Publishers Weekly – Starred Review
"Head and shoulders above anything else Gardner’s written, this riveting novel represents the author at the height of her powers."
- Booklist - David Pitt - Starred Review
"Few authors have Gardner’s gift for imbuing realistic and flawed characters with a strangely compelling humanity. Her stories are always densely plotted and completely captivating."
- Romantic Times - Jill Smith - 4 1/2 stars
"Sometimes a series writer. . .rises above to produce a book that stands alone because it’s that good. Indeed, Gardner continues with her lead character from Alone, Massachusetts state police Det. Bobby Dodge, but in Hide (Bantam, $25), she really brings her game."
- NY Daily News
"A fast-paced work of suspense that grabs the reader with a stranglehold."
- The Denver Post
"When you run, you’re never the person you should be. Annabelle Granger has been running for 25 years since she was a little girl. From who and what she never knew. Her parents just upped sticks and off they went, until it became a habit she couldn’t break. Then six bodies turn up in the grounds of an abandoned mental hospital in Boston, and one of them bears her name. An intriguing start to an intriguing novel, where a case that has haunted Detective Bobby Dodge for years jumps up and bites him again. No matter how screwed up the main characters are, I really warmed to them-although I had no idea who to trust. A brilliant book not to be missed under any circumstances."
- The Independent (UK)