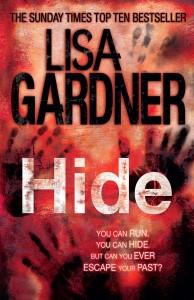 YOU CAN RUN. YOU CAN HIDE.


Annabelle Granger was seven years old when it first happened. She arrived home to find the suitcases packed and her parents desperate to flee their home. Then followed years spent running, from what, or who, she doesn’t know, just an endless blur of new faces and new towns.

Now, aged 30, Annabelle has finally settled in Boston and is happy with her life. Until the bodies of six girls are found in the grounds of an abandoned mental institute and a newspaper declares her one of the victims.

Detectives D. D. Warren and Bobby Dodge are determined to unravel the decades-old riddle and they fear that the discovery signals the return of a notorious serial killer, Mr Bosu – Bobby’s worst nightmare. As they get closer to the truth they will all be forced to confront the uncomfortable truths in their pasts; because ultimately, there is no hiding place. . .

BUT CAN YOU EVER ESCAPE YOUR PAST?