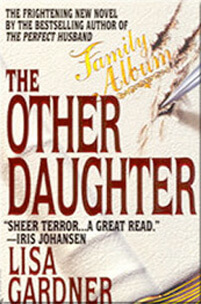 Winner of the 1999 Reviewer’s Choice Award

Winner of the 2000 Daphne Du Maurier Award for Suspense

WHAT YOU DON’T KNOW CAN KILL YOU

In Texas a serial killer is executed, taking to his grave the identity of his only child. In Boston a nine-year-old girl is abandoned in a hospital, then adopted by a wealthy young couple. Twenty years later, Melanie Stokes still considers herself lucky. Until. . .

Melanie had lost all memory of her life before the adoption, and now someone wants to give it back. Even if it includes the darkest nightmare the Stokes family ever faced: the murder of their first daughter in Texas. As Melanie pursues every lead, chases every shadow in the search for her real identity, two seemingly unrelated events from twenty years ago will come together in a dangerous explosion of truth. And with her very life at stake, Melanie will fear that the family she loves the most may be the people she should trust the least.

"Sheer terror. . . A great read"
- The Book List
"In her newest, Gardner (The Perfect Husband) indulges her fascination with the dark side of family life, where the ties that bind also gag, choke and strangle. Once again, Gardner serves up suspense at a furious pace."
- Publishers Weekly
"I predict readers will find The Other Daughter very hard to forget."
- The Romance Reader