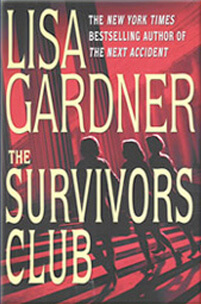 The first rule is never blame the victim. They survived what no woman should ever have to endure. Now these three women have the means, the opportunity, and the perfect motive. Are they trying to get away with murder – or is someone trying to make sure that this time they don’t get away at all?

The Survivors Club. . .that’s what Jillian Hayes, Carol Rosen, and Meg Pesaturo call it. They won’t consider themselves victims. They are survivors. They faced the blazing headlines and helped lead the investigation that caught the man who changed their lives forever. And now that Eddie Como, the College Hill rapist, has been murdered, shot down outside a packed courthouse moments before his trial was about to begin, all three women are openly ecstatic that he’s dead. They are also the prime suspects in his murder.

Detective Sergeant Roan Griffin knows all too well what can drive even the best people to cross the line. But he has never seen a case quite like this one. No one doubts that the murder of Eddie Como was a professional job, especially when the gunman is killed only blocks away from the shooting. But questions taunt Griffin: Who ordered the deaths of Eddie Como and his killer? Could three ordinary women have been driven to do the unthinkable? Had someone in the Survivors Club become a killer?

Griffin seeks the truth – and finds himself confronted with the leader of the Survivors Club. Jillian Hayes is beautiful, successful, cool as ice, and she harbors a pain that mirrors Griffin’s own. Did the horror of what happened to her push her over the thin and desperate line that separates survival and revenge? And if it did, could he blame her – or anyone in the Survivors Club?

Then another woman is brutally attacked. . .  Suddenly, with the city on the ragged edge of panic, gripped in a media and political firestorm of controversy, cover-up, and conspiracy, the hunt is on for a ruthless and cunning killer. For Griffin, this may well be the case that shatters his career. For Jillian, the harrowing nightmare is beginning all over again. Someone is out there. Someone who wants to finish what was started. Someone who wants to make sure that no one survives the Survivors Club.

"Showing a flair for lip-biting suspense, bestselling novelist Gardner combs out a tangled plot to an engrossing. . . effect. This club is worth the dues."
- PEOPLE
"Gardner returns with her best effort yet in this dynamite tale. . . Readers are forewarned that they may be up all night finishing this masterfully crafted thriller."
- Booklist
"The Survivors Club starts fast and never stops moving. The plot is clever, complex and original."
- Phillip Margolin - Bestselling Author
"This should cement Lisa Gardner’s place on the bestseller lists. The Survivors Club has it all-provocative plotting, an astute eye for detail, engaging characters, and a razor-sharp emotional edge."
- Stephen White - New York Times Bestselling Author
"Lisa Gardner’s The Survivors Club is a high-octane, nerve-jangling tale of suspense."
- Harlan Coben - New York Times Bestselling Author
"Hot dang, a new Lisa Gardner book! I love her hot, fast thrill rides. I’m always first in line to grab my copy of her newest release the day it arrives in stores. For my money, when it comes to suspense, nobody does it better."
- Jayne Ann Krentz - New York Times Bestselling Author
"Gardner should hit the charts again with this one. . . One cannot read this excellent new novel by bestselling author Gardner (The Next Accident) without wondering what actors might play these characters, especially the detectives. (Russell Crowe in his Bud White mode should star as Roan Griffin, and Dennis Franz seems a natural for the rumpled and sarcastic Fitz.) A sensitive but tough Rhode Island state police detective just returned from a bereavement leave (his beloved wife has died of cancer), Griffin encounters a hell of a case: a serial rapist, Eddie Como, is professionally hit in the courthouse parking lot, but whoever set up the kill doesn’t want any loose ends: a car bomb results in an extra-crispy assassin. The prime suspects for this crime are Eddie’s surviving victims: Jillian Hayes, who was beaten when she nearly caught the man after he raped her young sister, Trisha, who died; Carol Rosen, neglected wife of a successful attorney with a secret, who was raped in her own home; and the first victim, young Meg Pesaturo, who has mob ties but remembers nothing about the attack. But this is only the beginning of the case, for the rapist seems to rise from the dead to strike again and an old nemesis of Griffin’s may have everything to do with it. The three-dimensional characterizations are compelling, and the plot barrels along with surprising new twists that feel inevitable once they occur. Though the plot doesn’t jell until our hero meets his match in city cop Fitz, the book then rocks and rolls right up to a nail-biter ending coming perhaps a tad too quickly. Roan Griffin is a triumph: hurt, tightly wound, but holding it together and regaining his compassion and ability to reach out. And the grace-note minor characters-the wily nurse Toppi and Jillian’s silent former singer mother, Libby-are gems. Gardner should hit the charts again with this one."
- Publishers Weekly
"A PERFECT TEN."
- Providence, Rhode Island – Present Day
"The Survivors Club is a multi-layered, absolutely riveting thriller. A rollercoaster ride of suspense and surprises, it’s a fast-paced, edge-of-your-seat, can’t-turn-the-pages-fast-enough story that will appeal to fans of thrillers and suspense novels as well as to readers who enjoy romantic suspense. Well-written, expertly researched, with intriguing characters and an impressive depth of characterization given all the action, The Survivors Club will be a strong contender for best suspense novel of the year."
- Romance Reviews Today - Susan Lantz
"Gardner is the grand mistress of storytelling. Not only are her books amazingly detailed and electrifying, they capture the essence of each and every character we are introduced to, whether they are central or secondary in nature. Brimful of emotion and suspense, this brilliant thriller is a definite must for your library and will leave you wanting more."
- The Best Reviews - Janice K. Wagner