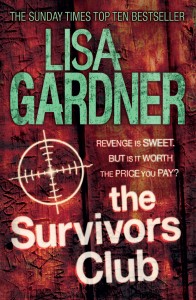 Jillian Hayes, Carol Rosen and Meg Pesaturo’s lives changed forever in an instant, when Eddie Como – the College Hill Rapist – came into their lives. But they refused to be victims; instead, they chose to be survivors. Helping to put him away was one form of justice but they couldn’t deny that secretly they wanted his life destroyed, as he destroyed theirs.

So when Eddie is shot down outside the courtroom on the eve of the trial, they are both relieved and revenged. But now they’re also prime suspects and surviving is about to get tougher still.

Detective Roan Griffin thinks this was a professional hit and all that remains is to work out who ordered it. He knows that the women are key but when another woman is savagely attacked, the situation gets a lot more complicated. For Griffin, the hunt is on to find the person responsible, before membership of the exclusive club grows. . .

BUT IS IT WORTH THE PRICE YOU PAY?